Posted on January 24, 2017 by chrisj Posted in language, technology

I recently did some of Coursera’s data science modules as way to sharpen my skills in big data. The modules use R to process the data and do the statistical analysis. My goal is to use this knowledge, I will try to analyze Tobago’s precipitation and temperature for the period 1980 to 2015. The data can be found at the Trinidad & Tobago Meteorological Service. This analysis will be in two parts: Rainfall trend and Temperature trends.

For the past few (10?) years Tobago have been experiencing rather hash drought like conditions. Each year, the Water and Sewerage Authority (WASA) has implemented its Water Supply and Conservation plans in order to ensure a supply. Some of these included water rationing, a ban on watering plants or washing cars with a hose.

As a farmer, I felt the effects of the heat and lack of rain fall during the wet/rainy season. I had to use pipe borne (via a tank) water almost everyday.  Fortunately, I was able to harvest my crops though I believe the yield would have been higher if the rain fall was “normal”.

The main reason WASA has given for the short fall in water is that rain fall has been steadily declining over the years.  While the public believe WASA did not plan for increase usage by the population. So which is true?  No planning for increased usage  or decrease rainfall over time. Hey, maybe both!.  WASA has not given any “numbers” to back up their assertion. While there has been a marked increase in usage due to a higher number of visitors to the island especially during July/Aug months.

So is WASA’s reason for the short fall true?

Summary of what I did

Downloaded and imported the data into R (actually used Rstudio). A review of the data shows there were:

After tidying (i.e. clean and prep for analysis) the data, I thought as a first pass to see whether WASA’s assertion of the drop in rainfall, I looked as the rainfall for the wettest month (July) of the year in 5 year gaps. Also, I looked at the total rainfall for the years 2000 to 2015. Graphs shown below. I wanted to see if there was a noticeable drop in the rainfall over time.

The yearly totals of rainfall graph shows a consistency until the sharp drop from 2014 to 2015. 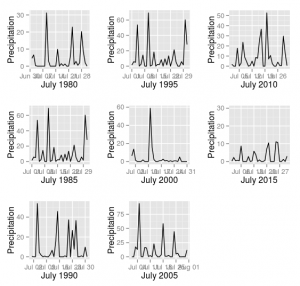 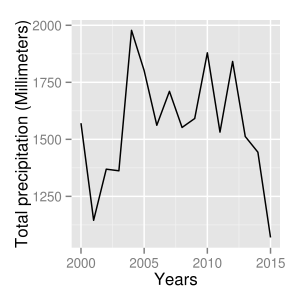 Full details can be found here

Unfortunately, I can’t draw any conclusions for the entire island only for the area where the data were collected. As I mentioned above, the yearly rainfall graph shows no significant decline in rainfall over the years. This begs the question: What’s the cause of lack of water in the dry season. Some reasons could: be an increase in population in the area without a corresponding increase in water collection; Lower rainfall in other catchment areas that feed the area where the data was collected; lack of maintenance of infrastructure (there are a lot of complaints about leaks).
In searching whether data were collected from other areas of the island, I found out that WASA has about 50 stations across Tobago. I was also told the may be gaps in the data due the lack of proper maintenance of the equipment in the stations.